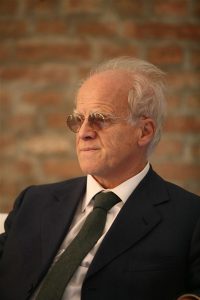 Antonio Padoa Schiopa was born in Vienna on August 23, 1937. He spent his youth in Sori (Genova), Milan and Trieste. After his years as a student at the Ghislierei College he graduated in Law from the University of Pavia in 1961 and then taught at the College beginning in 1971. From 1980 until 2007 he was a professor of the History of Medieval and Modern Law at the University of Studies of Milan, (since 2008 professor emeritus) where he was also principal of the Law Faculty from 1983 until 1999.

His scientific teaching is mainly based on the history of medieval and modern civil and penal justice, canonic medieval law and on modern commercial law with a European and historical perspective, on the reform of pre and post university studies and on the constitutional profiles of the European Union.

His European studies have as a common element the evaluation of the constitutional aspects in the process of European unification, with special attention to the European Parliament’s life from its first universal suffrage election (1979) to the present, following the transformation of structures and rules gradually introduced in order to realize the Common Market and the Euro.

His critical examination of the negotiations – from Maastricht to Amsterdam and Nice, from the project of the constitutional treaty of Lisbon etc., until the present, include the evaluation of ideological and political obstacles that still slow progress towards a true federal union, with a limited but efficient and democratically elected government.

His attention to the serious social and economic crisis of the past years, which is still not solved, finally led Padoa Schioppa to support the need of more fundamental political, economic and institutional choices, particularly underlining the need to give a more crucial role to the European Parliament.