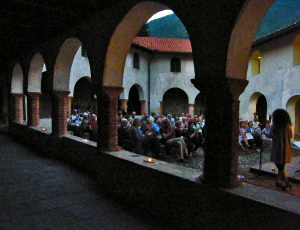 “Fair of St. Bernard” in Macugnaga

“Alte Lindbaum gemeinde” – Community of the Vecchio Tiglio supported by the Foundation, promotes many cultural events and activities for tourists with the aim of maintaining and improving the cultural traditions in Macugnaga, the most ancient roots of civilization in these mountain valleys, of the Walzer. (German people from Wallis)

“The Fair of San Bernardo” is held in Macugnaga (VB every summer, during the first weekend of July. Begun with the aim of reviving the ancient “Fair of the Assumption” that took place in Medieval times, the fair draws more and more craftsmen every year to show their work and techniques.

Wood and stone sculptures, engravings, pottery, embroidery, straw baskets, iron works and traditional farm tools are displayed and sold during the show. The craftsmen come from not only the valleys of Monte Rosa but also from Valle d’Aosta, Piedmont, Lombardy, Switzerland and Alto Adige. 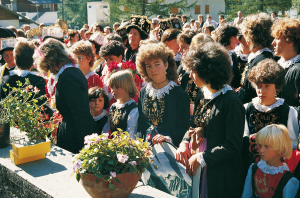 So, the atmosphere during these days is much like that of when the ancient Walser lived in these valleys. Going to fair or seasonal markets was a way to exchange goods and to earn the money necessary to acquire land, pay a fee or to buy anything that could not be produced at those heights such as salt, tools, fabrics, wine. Every year on the days of the fair in Mcugnaga the Congress of Studies holds a conference about the mountain. It always treats different subjects and involves the most important scholars in Europe. Ever since 1990 the “Badge of San Bernardo” is conferred on a person or an institution that actively participated in favor of the mountain. Since 2002 the “Segale d’oro” is given to a youth who decides to stay and work on the mountain and to dedicate his life to preserve it.